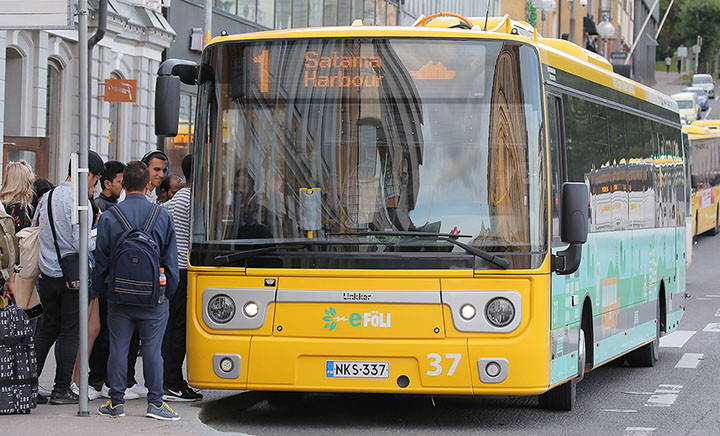 (PhotoCredit: E-Bussed, TUAS)
The buses will start running in July 2021. The tender, concerning three different bus lines, was won by Nobina, a leading electric bus operator in the Nordic countries. The e-buses are part of a bigger procurement including also 13 diesel buses. In Turku, e-buses have since 2016 been piloted on one line (line 1, from Turku Harbor to Turku Airport), which is currently almost fully electric with six operating buses. The new lines going electric in 2021 are all regional lines, with 3 million passengers annually, and as such will significantly increase the range of electric public transportation in Turku.

This is a natural continuum to procurements made in 2019 in the Helsinki Metropolitan Area by the local public transport authority HSL, as they acquired altogether 40 new vehicles, increasing the share of electric vehicles in their fleet drastically. Prior to this, there were about 20 e-buses driving on the streets and roads in whole Finland.
What is especially delightful about the latest procurements made in Turku and Helsinki is the fact that they were market based. In other words, e-buses are becoming able to compete with their diesel counterparts not just with their emissions-related and other environmental benefits, but also with price, which is of course crucial for a widespread electrification of our bus fleets to take place. In Finland, the introduction of e-buses has before been dependent on public organizations’ pilot projects and has required strong financial support. For instance in Turku the electrification of the first bus line in 2016 was initially made possible by a funding decision by the city council and investment support from the Ministry of Economic Affairs and Employment of Finland.

Another important improvement facilitating the shift from diesel fueled to e-buses is the developing battery technology, which increases the range of the buses. The limited capacity of batteries has meant that e-buses must be charged frequently during the day, requiring plenty of expensive infrastructure for charging. The e-buses that the Finnish HSL introduced last year, for example, can for the most part drive an entire day and are charged during the night at the depot. Thus, no charging infrastructure was needed along their routes.

On the other hand, the bigger battery size enabling the range means higher costs and less efficiency. Currently both technologies and ways of operating have their pros and cons. Bearing this in mind, the fact that tendering for bus fleets is often done separately for different lines, enabling the optimization of battery capacities and charging frequencies, makes bus fleets a prominent sector for electrification.

Many Finnish cities, including Turku, are aiming to become carbon neutral by 2029, and increasing the share of e-buses in public transportation fleets is a key ingredient in this effort. An additional push comes from the EU and the Clean Vehicles Directive, which requires the percentage of e-buses in all procurement decisions concerning public city transportation to reach nearly 30%, starting from 2025. When comparing to e.g. Norway or Sweden, Finland is still somewhat behind when it comes to numbers and shares of e-buses, but the recent progress definitely points to the direction of e-buses becoming a “normal” part of the bus fleet in our cities.